Mason was almost 16 years old when he completed a 5-day intensive at Step by Step (now Key to CP). He had started to experience loss of function and he was in pain due to orthopedic malalignment. He had given up and did not believe that he could improve functionally – he was depressed. This intensive was a last ditch effort to get Mason back on track.

It was clear that Mason was not happy to yet again be in physical therapy. He had too many failures behind him to dare to have hope.  The physical therapists and Mason’s parents had 5 days to prove to Mason that it was NOT TOO LATE FOR CHANGE. 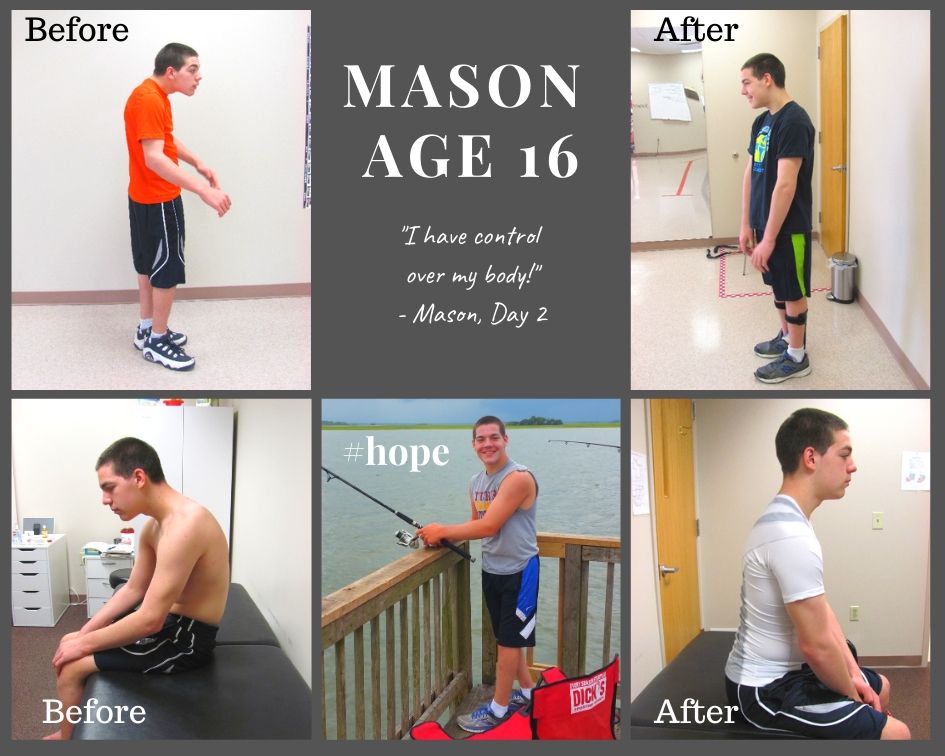 Mason received 3 hours of physical therapy per day focusing on Alignment, Awareness, Activation and Strength. One of the goals for the intensive was to create a “train like an athlete” program that Mason could continue to work on at home.

Mason was very weak in his core muscles and in his legs. His movement form was far from optimal, which was causing him pain and he was having increasingly more difficulty with his functional mobility.

The very first thing that was done was to align Mason’s trunk using a compression sports posture shirt (by Alignmed). The shirt brought his muscles into alignment and the compression gave him awareness so he could begin to activate them to hold a much better posture. Once his trunk was aligned, we could begin to teach him movement control and balance.

It took 2 days before we saw the first smiles and as Mason realized that he COULD IMPROVE, he became an eager partner of the team.

A training program was developed and it was decided that it was time for Mason to train in a gym just like his peers. He knew what needed to change in order for him to reach his long-term goals of functional independence and keeping a job.

Mason’s mother shared the results of his 5-day intensive. “Mason’s posture improved, he was able to rely on his legs vs. his canes to walk, he disclosed ‘I have control over my body’ on day 2 and we were all able to see how certain strengthening exercises help with certain functions and why. The therapists were able to get him to understand that what he does and doesn’t do will impact his life. He became more responsible, and willing as he saw results and saw the potential to accomplish more with harder work. We saw results on the first day and by the end of the week we are absolutely thrilled and ready to go home and take the ‘train like an athlete’ program on! Exhilarating! Cannot thank Pia and her team enough! They are Angels on Earth.”

Mason’s mother sent us this note:​

“We are extremely proud of Mason but more proud and blessed to have come across the 2 of you! 🙂 You will be happy to know that Mason got his “dream job”. He is now an employee of Madison Tree and Landscaping and is cutting grass for them, using a Bobcat for loading, and other things. He started this week 🙂  He cut 3 acres yesterday and said it was the best day of his life!”

Four years later, Mason’s mother contacted us to share that he had passed a program certifying him to operate big machinery like front loaders. We continue to hear from her from time to time about how he has accomplished things that he was told he would never be able to do!